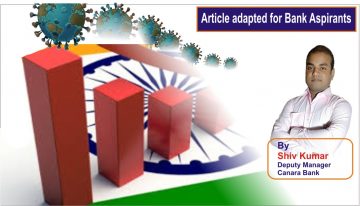 India currently faces notable short-term challenges, including the outbreak of COVID-19 and the preceding slowdown of the informal economy. We take a look at the current situation:

According to the International Monetary Fund, India will be a large economy worst hit by the Covid-19 pandemic. The Fund now says that Indian GDP in the ongoing financial year, which began in March 2020, will contract by 4.5%. Just a few weeks ago, it had been predicting a 2% growth for the year.

However, the situation is much worse than what the headline numbers suggest.

The government’s confidence is inexplicable. It has not done enough to reinvigorate the economy. Its big weapon — spending — has failed and there is little left in its armory. Recovery needs reform. India has postponed competitiveness-enhancing measures long enough. In a crisis of this magnitude, there are no excuses left.

One of the reasons for the current slowdown has been the weak demand in the country especially from the rural sector and disruption of the informal economy. Thus, the government should try to increase disposable incomes (through schemes like MGNREGA) in the hands of people which will revive the growth in the economy and boosting the MSME sector through effective implementation of 20 lakh crore package announced recently.

Bank Whizz imparts 360-degree Descriptive English for Bank & SSC Exams solution with their exhaustive courses which include study notes, video lectures, descriptive mock tests, along with the latest descriptive English materials. Avail our expert help by enrolling with us to keep your knowledge updated and stay ahead of your competition.