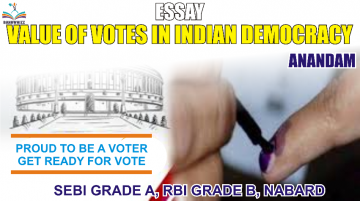 Value of Vote in Indian Democracy

In a democratic set-up, ‘vox populi, vox Dei’ is a supreme slogan and the Head is merely a tool at the hand of the people. Abraham Lincoln defined Democracy as ‘the Government of the people, by the people and for the people’. Hence, votes cast by the people to form the government keeps the greatest value in a democracy.

India is the largest and the most successful democracy in the world and voting is the constitutional right of every citizen over 18 years of age. They exercise their power to directly elect the leaders of their choice and at the same time, they have also the power to eliminate them by using their franchise.