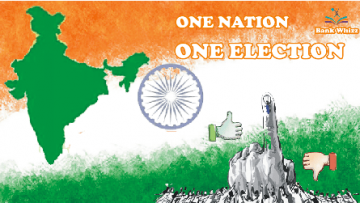 ‘One Nation, One Election’ refers to a system where elections to all states and the Loksabha would be held at once or in phases thus saving time and money galore. PM Narendra Modi advocated it in one of his speeches as,

‘One Nation, One Election’ isn’t just and issue of deliberation but also a need of the country. Elections are held at different places every few months and it hampers the developmental work, which everybody knows. Therefore it is a must to have a deep study and deliberation on it.’

India got independence in 1947 and everything was to start afresh. So, elections were held simultaneously until 1967. It was only after the dissolution of some Legislative Assemblies in 1968 and 1969, and the Loksabha in December 1970, …………..

Taking the pros and cons of the idea ‘One Nation, One Election’ in account, the idea holds water and it can be implemented……