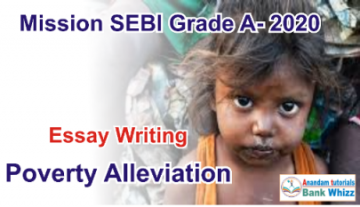 Poverty is a situation in which people are unable to get even the basic necessities of life such as adequate food, clothes, shelter, proper medication and education. Most people in India cannot get bread for two times properly. Poverty has increased in urban India due to increase in urban population as people are migrating from rural areas to towns and cities for jobs or some money related activities. The income of about 8 crore people is below the poverty line and 4.5 crore urban people are on the margin. Most of the people living in slums are illiterate. Despite some steps taken, there is no satisfactory result in terms of reducing poverty.

The main cause of poverty in India is its increasing population, weak agriculture, corruption, old practices, huge gap between the rich and the poor, unemployment, illiteracy, infectious diseases etc. A large part of the population in India depends on agriculture, which is poor.Poverty is caused by many factors such as illiteracy, unsafe diet and nutrition, child labour, …….For complete Model Essay and a list of other model essays Click here