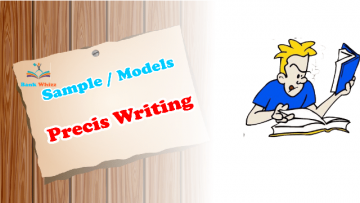 The following are some worked out examples of Precis Writing. Notice, how precis has been done.

Speech is a great blessing, but it can also be a great curse, for while it helps us to make our intentions and desires known to our fellows, it can also, if we use it carelessly, make our attitude completely misunderstood. A slip of the tongue, the use of an unusual word, or of an ambiguous word, and so on, may create an enemy where we hoped to win a friend. Again, different classes of people use different vocabularies, and the ordinary speech of an educated man may strike to an uneducated listener from what it does to men of our own class. Thus speech is not a gift to use lightly without thought, but one which demands careful handling; only a fool will express himself alike to all kinds and conditions of men.

Let us proceed in the manner we have been talking about to make a good précis of it. What does the passage deal with? The first reading will give you the answer: the writer is talking about speech being both a blessing and a curse.

What are the key words, clauses, and sentences? When you read the passage again, you will underline the following: “Speech is a great blessing but it can also be a curse….” “….different classes of people use different vocabulary….’ And ‘Thus speech is not a gift to sue lightly without though but one which demands careful handling….”

What are the main points? We may jot down the following:

Now if you put these points in continuous form in your own words your précis should read something as follows:

Speech is a valuable gift, but if we are to make ourselves understood, it should be used carefully, since we may distort our meaning not only by careless use of words but by ignoring the fact that words do not always mean the same thing to all people.

What happens when one person sends a message and another receives it? First, consider the nature of the usage-the word in which most messages are expressed. All words are symbols. A symbol is a standardized sign, seen or heard, which stands for an object, event, or idea as agreed upon by senders and recipients of messages. It need not resemble what it stands for. Thus it differs from a pictorial representation or imitation, such as a portrait, a street plan, or an organization.

A set of symbols agreed upon by two or more people is called a code. By far the most important codes are those which form language. In any civilized language, here is a primary code of spoken words, formed from speech sounds. There is also a secondary code of letters (the alphabet which can be combined to stand for the speech sound of the primary code, as the letters-t,r,e,e-stand for the sound ‘tree’. Neither letters nor sounds have any resemblance to what they denote a tree.

Whenever language is used, a sender must encode his message, and the pient must decode it. For language communication to be effective, senders and receivers must agree on all the details of the language code. If you go to France in ignorance of the French code and meet people ignorant of the English code, you have to resort to gestures and attempts at the ct representation of what you want to say. How inadequate this can be is shown by the story of an English tourist, who suffering from hunger in a French street, moved his hands and jaw to convey his wish to find a restaurant, he was obligingly conducted to a dentist’s waiting room!

Words which we use for expressing a message are symbols A symbol by agreement among its users stands for something other than itself. There is, however, no similarity between it and the thing it denotes. A set of symbols understood by two or more people is a code. Language is the most important code. Each language used by the civilized world has two codes; the primary, consisting of sound symbols and the secondary, consisting of letters. For effective communication agreement among the users regarding details of the language code used is essentials. The absence of such an agreement leads to misunderstanding and confusion. 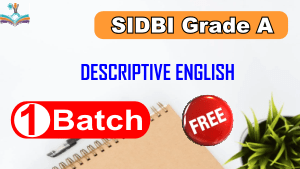