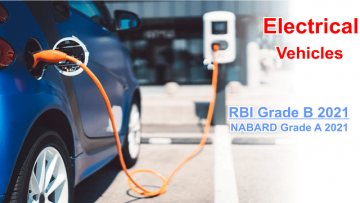 When a vehicle needs electric equipment or motors for its motion is called an Electric Vehicle. It works on the principle of conversion of energy. In these vehicles, Electrical energy is converted into mechanical energy.
There are three basic types of electric vehicles:-

Challenges:-
Charging problem
Battery durability and its actual performance after getting charged.
Lack of Battery manufacturing shop is really a big challenge for Indians to adopt electric vehicles.
As fuel stations are available, the lack of battery charging stations is also an issue.
Its high demand and lower supply due to high customs duty.
Budget 2021 on EV
Every electric automobile company was all ears for the budget 2021 for their sector but this time, FM Nirmala Sitharaman didn’t announce any new reform for EV.
The import duty on the components of battery-powered vehicles has increased between 5% to 15% which will increase the cost of production and ultimately the cost of the vehicles.