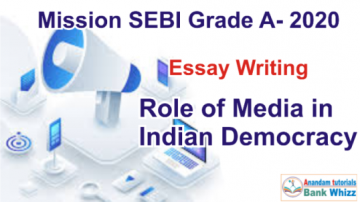 Role of Media in Indian Democracy

“If it were left on me to decide whether we should have a government without newspapers or newspapers without a government, I should not hesitate a moment to prefer the later.”

The word ‘Media’ refers to that kind of communication which is made by means of radio, television, newspapers, magazines and the internet to influence people widely.