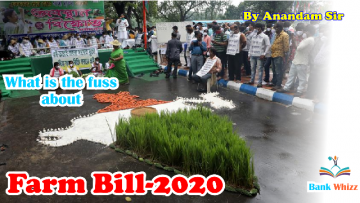 With the motif of changing the very face of Indian agriculture, the Indian President Shri Ramnath Kovind gave his assent to the three Agriculture Bills on September 27, 2020 and thus turning these into Acts. The Honourable Prime Minister called the Acts ‘historic and necessary’ for the country to move forward. The Agriculture Minister called these ‘revolutionary in the lives of farmers’.

The three Acts are as follows:

Though the government asserts that the reforms in the Acts will bring about a lot of positive changes in the lives of farmers by doubling their income in the coming two years yet the reforms have invited a lot of criticism on behalf of farmers’ unions and opposition parties. According to such unions and parties, the reforms will end MSP which is the lifeline for small and marginal farmers. Thus the farmers’ plight will exacerbate. The existence of APMCs will end in the future and the farmers will be forced to sell their yields to private entities that will not give them reasonable prices. In this way, their future will become bleak. They also fear that the promotion of contract farming will allow corporate investments and they will be forced to produce according to the choice of such corporate. Thus they will turn out to be labourers in their own lands. Also, they oppose the idea of giving a free hand to the black marketeers to hoard grains even in times of shortage and thus causing inflation in the country.

Benefits of the Acts

The new Farm Acts are set to benefit all kinds of farmers whether small, marginal, or big. Others who will gain considerably from the reforms are agri-tech startups, Agri warehouses, and organized players in the food trade. Other benefits of the reforms in the Acts will be as follows:

Since the approval of the reforms in the Acts, there has been a continuous protest by farmers’ unions especially those belonging to Punjab, Haryana, and Rajasthan. The farmers have closed the Delhi borders-Singhu and Tikri- in protest of these. Their protest is said to have been hijacked by some political parties. Thus the very sentiment of the protest seems to have lost. However, the farmers’ gathering keeps rising posing threats to India’s security. Thus, the main challenge of the government is to convince such farmers.

The protest has been going on for a long time and the Delhi borders are still sealed causing a lot of problems for the local people. National security is at stake. And so the government is on the effort to convince the formers through various means so that normalcy may be restored. It has kept its dialogues on with the farmers, which is a good indication. PM Narendra Modi has assured them of safeguarding their interest by all means.