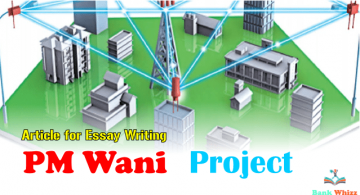 The Prime Minister Wi-fi Access Network Interface (PM-WANI) Scheme is a Central Government’s scheme the aim of which is to elevate wireless internet connectivity across the country. The Union Cabinet on December 9, 2020, approved the establishment of public Wi-Fi networks provided through Public Data Offices (PDOs) which may be small shopkeepers such as Panwala, Chai-wala, Groceries, and the other. Such shopkeepers will not need to pay for the license for reselling internet connectivity to their customers. Thus the scheme will boost the ‘ease of doing business’ and ‘ease of living’ in the country.

1. The scheme will make small shopkeepers (Panwala, Groceries, Tea-stalls, etc.) able to provide Wi-fi service to its consumers without charging on them any registration or license fee. Such small shopkeepers would earn passive incomes in this way.

2. The scheme will strengthen the Digital India Mission. Even the unserved citizens will get connected with such an easily available Wi-fi network interface at a low-cost option across the country.

3. The scheme will benefit all factions of society. The people from even remotest areas can get easy internet connectivity at lower costs for getting an online education, entertainment, and the other.

4. The scheme will end red-tape which makes ‘ease of doing business’ rather cumbersome. The service provider can apply for Wi-fi connectivity online without any intermediaries.

5. The TRAI (Telecom Regulatory Authority of India) has reported that on the proper implementation of the PM-WANI scheme, India’s GDP is likely to increase by 1.4% because of an almost 10% rise in net penetration.

6. On implementation of this scheme, the internet charges will reduce further, which will finally benefit the people of all sections a lot.

7. India has built a versatile and robust identity infrastructure in the form of Aadhaar and DigiLocker. PM-WANI builds on these to authenticate its users. And so, it is immune to any cyber attack.

8. The scheme will benefit international tourists who will not need to pay exorbitant roaming charges to their home networks.

1. As public Wi-fi network will easily be available to the people at large, confidential data like passwords, pins, etc. may come at risk over the network.

2. As a public Wi-fi network will be accessed by many people at the same time, the interwork speed may get affected.

1. The government will have to build stronger Cyber-security Architecture to save the public and private data. The Public Data Protection Bill, 2019 must be enacted properly.

2. The government will have to fix the low data speed issue after the implementation of the public Wi-fi network.

PM-WANI has the potential to bring about a revolution in India’s digital technology. It will give a fillip to small businesses. It requires only proper execution and maintenance.