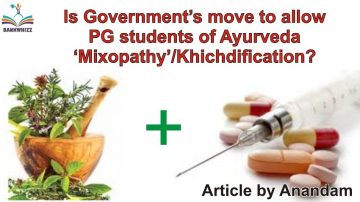 On November 19, a government notification listed out specific surgical procedures that a postgraduate medical student of Ayurveda must be “practically trained to acquaint with, as well as to independently perform”.

The Central Council of Indian Medicine which is the regulatory body for the study and practice of Ayurveda in India, amended the Indian Medicine Central Council (Post Graduate Ayurveda Education) Regulations, 2016, to include the regulation to permit post-graduate students of Ayurveda to be specialized in Shalya Tantra (referring to general surgery), shalakya Tantra (referring to the diseases of the ear, nose, throat, head, eye, and oro-dentistry) and Prasuti evam Stree Roga (referring to Obstetrics and Gynecology). Students of these three disciplines are granted MS (Master in Surgery in Ayurveda) degrees.

The notification by the Council brought about a lot of furore from the Indian Medical Association (IMA), which called it ‘mixopathy’ or ‘khichdification’ in the sense that modern medicine and traditional medical science cannot be mixed together; both should move on individually. IMA questioned if the efficacy of Ayurveda practioners can carry out surgical procedures.

Let us discuss this issue point-wise whether the latest move by the government deserves to be called ‘mixopathy’ or ‘khichdification’ of ‘Ayurvedic Science’.

IMA national president Dr R Sharma says, ‘Modern medicine is controlled and research-oriented, we are proud of the heritage and richness of Ayurveda but the two shouldn’t be mixed.’ The point is that Ayurveda Science has its own course. It knows its limitations and is moving on its own track, making one stride after the other splendidly. Shushruta who is the father of surgery and who lived almost 2000 years ago gave birth to numerous surgical procedures many of which are copied even by the modern medicine. It must be noted here that India’s mortality rate of COVID-19 is notably lower than that of other countries despite India’s being densely populated. It is possible only by the decent work by both modern medicine and Ayurveda Medicine. Both have their own treatise they should be proud of.