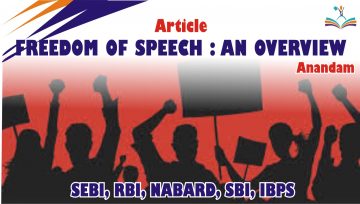 Unlike China, North Korea, Turkmenistan, Vietnam, Syria, Saudi Arabia, and some others, The Indian citizens enjoy ‘Freedom of Expression’ which is the right given by the Indian Constitution under Article 19(1). But it is not an absolute right. The Constitution also states its restrictions under the same Article 19(2). This indicates that ‘Freedom of Expression’ does never mean exercising this right crossing the limit of its boundaries.

The philosophy behind ‘Freedom of Speech’ lies in the Preamble of the Indian Constitution which secures to all its citizens to express their views and opinions at any issue through any medium, e.g. by words of mouth, writing, printing, picture, film, movie, etc. broadly speaking, this freedom includes Freedom of Press, Freedom of Commercial Speech, Right to broadcast, Right to Information, Right to Criticise, Right to expression beyond national boundaries, Right not to speak or Right to silence. But at the same time, the government can frame laws under the Article 19 (2) to impose reasonable restrictions in the interest of sovereignty and integrity of India, the security of the state, friendly relations with foreign states, public order, decency, and morality and contempt of court, defamation, and incitement to an offence.

India is a democratic country and the people here enjoy the right to raise their voice against the decisions and actions of the Government or even to express their resentment over the actions of the government on any subject of social or national importance. The democratic government has to respect and safeguard this right. But In recent times in the country, several cases came into the limelight reflecting the violation of ‘Freedom of Expression’ at the cost of the security and integrity of the country. Raising anti-Indian slogans, disrespecting the Indian colours, desecrating any religion in particular by means of movies, speeches, web-series etc. and abusing ‘Dalits’ are some of the blatant examples witnessed very recently.

Sharjeel Immam who was a former Jawaharlal Nehru University student, was charged with sedition and hate speech. FIIRs were filed in at least five states: Assam, Arunachal Pradesh, Delhi, UP, and Manipur for his hate speeches made in January, 2020. He has not got any relaxation from the Supreme Court as yet.

Kafeel Khan invited a lot of criticism for his inflammatory speech from social media. He has not got relief from Allahabad HC yet.

The recently released, new Amazon Prime web series Tandav has also gained a lot of controversies for hurting Hindu sentiments and describing it as anti-Dalit. More than 5 FIRs have been lodged against from different parts of the country; however, the Director of the web series, Ali Abbas Zafar, apologized unconditionally for knowingly or unknowingly hurting the sentiments.

As a democratic country, India is committed to safeguarding the right to Freedom of Expression; but its citizens must not forget that the country can punish any person irrespective of any caste or any religion in case the national integrity and security come at state.

Get complete package for SEBI Grade A, RBI Grade B Descriptive Mocks and Fodder Materials