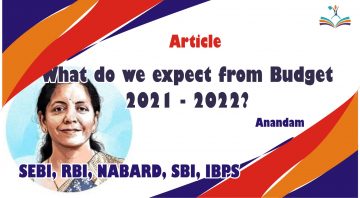 The year 2020 breasted the agonies from all fronts, which we all know. Probably, it was the worst year that all of us may have ever experienced. Everything came to a standstill. The share markets nosedived; the GDP sank into the negative territory, the edifice of education collapsed, the tourism industry got withered, people’s confidence to live waned. In fact, the entire nation seemed to have sunk into ceaseless trauma; however, the nation never gave up. It started oozing with confidence as everything was taking a sigh of relief with the waning cases of COVID 19. Everything started gaining momentum and finally, the V-day arrived when PM Narendra Modi launched a flagship COVID 19 Vaccination Programme on January 16, 2021. The withered humanity turned over a new leaf. Everything is now coming back to its normalcy.

As the hard times have blown over, all such sectors that had gone almost dead have started rising like a phoenix.

At present, the country has a lot of challenges to face, but with challenges come opportunities as well. It is a truism that for every big leap, one needs to take one step back. India is ready for that big leap, which can put it in the league of the developed nations.

There is no denying the fact that the nightmare of COVID 19 will not disappear into the thin air. A new strain of this virus has been discovered, which may again pose threats to all sectors. This is the reason why the government has started the world’s largest vaccination drive from the very month of the year. The government is working on the notion, ‘the healthier the country is, the healthier the economy will be’. For this, the government’s COVID 19 relief package of Rs. 20 lakh crore which is around 10% of the total GDP is proving to be a fillip, especially for MSMEs, farmers, and women co-operatives. The current account surplus moderated to 15.5 US dollar or 2.4% of the GDP in the July-September, 2020, the foreign reserves stand at around the US $586.082 Billion on January 8, 2021, which is the highest ever and the GDP contraction has reduced. It is believed that because of Base Rate the growth rate is expected to reach 7-8% in the year 2021.

During the Corona Period, the manufacturing sector performed better. This sector reached its peak in the last months of 2020. This is only because the government focused more on this sector under the Self-reliant India campaign. Rs 3.65 lakh crores to SMEs and Rs. 90,000 crores to the power sector have worked well for their promotion. Under PLI, the allocation of 1.46 lakh crores as incentives to the industries performing well has been another fillip for the economic growth.

Though India has improved its position in the ease-of-doing-business rank; however, it still needs to improve further; so the budget is expected to do positively in this connection.

The Service Sector in India is conspicuously big enough, but it is badly hit by the pandemic almost throughout the year 2020. The Budget 2021-22 is likely to have a big package for this sector.

The digital economy is expected to contribute 20% to the GDP. The government is going to auction the 2251 MHz spectrum in March 2021, which will boost this sector to reach the target.

The agriculture sector never underwent a crisis during the pandemic. Many workers from outside took to cultivation after coming back to their native lands and thus increasing the agriculture yields. The contribution of this sector to the GDP is merely 15% but it generates employment for 53% of India’s population. The government is committed to doubling the farmers’ income by 2022 and for this, it has materialized direct and indirect schemes. The three Agriculture Acts (Though in dispute) are believed to be a game-changer in the lives of the farmers. The coming budget will surely offer this sector much more in the Budget 2021-22 and thereby generating massive revenue.

Whether it is e-learning or e-shopping, the mobile played a vital role during the pandemic. During the year 2019-20, the government collected revenue of Rs. 2.52 lakh crores from the world’s second-largest telecom market. The market invited 3727 crore dollars from April 2020 to June 2020. It is likely to grow further after the auction of the spectrum. This sector expects the government to make the license pay regime, auction price, and taxes realistic.

The real estate sector needs to be promoted by giving relaxation to it in the Budget 2021-22 as this sector has been undergoing massive loss because of the Covid 19 pandemic. The government has decided to manage Rs. 70,000 crores for promotion of this sector under ‘self-reliant India Campaign’. It expects more from the Budget.

The country is waiting for the Budget 2021-22 with bated breath. The whole world is on the watch which way the Indian Budget will go. Let umpteen hurdles come on its way, India will pave its path through them.