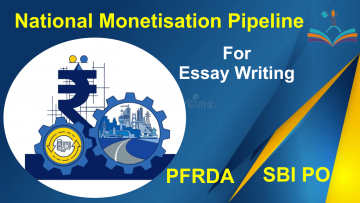 The Union Minister of Finance and Corporate Affairs, Smt. Nirmala Sitharaman launched the Asset Monetization Pipeline of Central Ministries and Public Sector Entities: ‘National Monetization Pipeline’. The NMP has projected a total monetization potential of Rs 6.0 lakh crore through core assets of the central government over a period of four years, from FY 2022 to FY 2025.

“The Asset Monetization Program has been shaped for universal access to high quality and affordable infrastructure for the common citizen of India. Based on the philosophy of building through monetization, the objective of asset monetization is private sector investment for creation of new infrastructure. This is essential for generating employment opportunities, enabling higher economic growth and seamlessly integrating rural and semi-urban areas for overall public welfare.

The plan is consistent with the Prime Minister’s strategic divestment policy, whereby the government will continue to have a presence only in some identified areas and the remainder will be privately operated.

This includes selection of de-risked and brownfield assets with stable revenue generation profile with the overall transaction structured around revenue rights. The primary ownership of the assets under these structures, hence, continues to be with the Government with the framework envisaging hand back of assets to the public authority at the end of transaction life.

The aggregate asset pipeline under NMP over the four-year period, FY 2022-2025, is indicatively valued at Rs 6.0 lakh crore. The estimated value corresponds to ~14% of the proposed outlay for Centre under NIP (Rs 43 lakh crore).

In terms of annual phasing by value, 15% of assets with an indicative value of Rs 0.88 lakh crore are envisaged to be rolled out in the current financial year (FY 2021-22). However, the aggregate as well as year on year value under NMP is only an indicative value with the actual realization for public assets depending on the timing, transaction structuring, investor interest etc.

“The strategic objective of the program is to unlock the value of investment in Brownfield public sector assets by harnessing institutions and long-term patient capital, which can then be further pursued for public investment,” he said. The focus is on what is envisioned through a structured contractual partnership against privatization or the slowdown in the sale of assets.

A greenfield project is one that is not constrained by prior work. It is building on unused land where there is no need to remodel or demolish the existing structure. Such projects are often coveted by engineers.

A brownfield (also called “brown-field”) investment occurs when a company or government entity buys or leases existing production facilities to begin a new production activity. This is a strategy used in foreign direct investment.

Lack of identifiable sources of income for a variety of assets.

The pace of privatization is slow in government, businesses, such as Air India and BPCL.

In addition, at least encouraging bids in the recent PPP initiative on trains indicates that it is not so easy to attract the interest of private investors.

Lower capacity utilization levels in the oil and gas systems.

Investment interest in national highways with fewer than four lanes.

For example, Konkan Railway has multiple stakeholders, including state governments, which have an interest in unity.

It is implementation that is key – Many issues have been addressed by this government, as a result of the development of infrastructure under the NMP, implementation of the plan is key to its success.

Dispute Resolution Mechanism: Furthermore, there is a need for an effective dispute resolution mechanism.

Multi-stakeholder approach: The success of the infrastructure expansion plan will depend on other stakeholders’ ability to play their role.

This includes governments of states and their public and private sector companies.

Against this background, the 15th Finance Committee recommended the establishment of a high-level intergovernmental panel review the Central and State Fiscal Accountability Act.