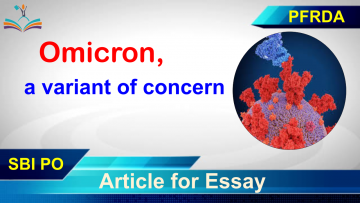 The World Health Organization on November 26 declared the recently-discovered B.1.1.529 strain of COVID-19, first detected in southern Africa, to be a variant of concern and renamed it Omicron. 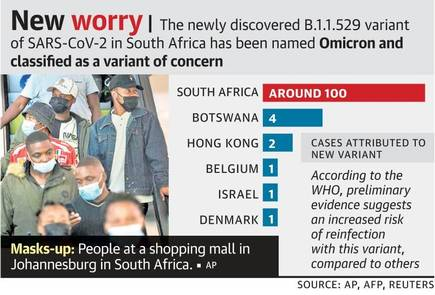 Omicron is a variant of SARS-CoV-2, the virus responsible for COVID-19. It was initially detected in South Africa on 24 November 2021 and has been reported to WHO. On 26 November 2021, the WHO referred to it as a variation of the concern and named it after Omicron, the fifteenth letter of the Greek alphabet.

The variant has an unusually large number of mutations, many of which are novel and many of which affect the spike protein used for most vaccine targeting at the time of its discovery. This level of variation has led to concerns about transmissibility, immune system evasion, and resistance to the vaccine. As a result, the version was quickly designated as being “of concern”, and travel restrictions were introduced by several countries to limit or slow its international spread.

The WHO decided to name the variants according to the letters of the Greek alphabet to avoid stigmatization of countries that first discovered them.

The name Omicron was chosen rather than the two letters Nu or Xi between Mu and Omicron.

To avoid confusion with the English word “new” and the similarity of the Chinese surname Xi, the WHO has deleted the preceding nude and xi letters in the Greek alphabet. The World Health Organization designates Omicron as a form of concern.

The Post Graduate Institute of Medical Education and Research (PGIMER) in Chandigarh has called for caution against the new Omron variant of the coronavirus, given its ability to evade immunity and potential transmission potential as compared to the delta variant. However, there is currently no evidence of the import and transmission of the Omicron variant in the Indian subcontinent.

The fight against the new variant will require increased access to testing, treatment and support, as well as increased immunization coverage in various areas. Equal access to vaccines will be essential to control the omicron variant and slow the emergence of future variants.

Approximately 44% of adults in India were fully immunized and 82% received at least one dose.

For example, distancing, wearing a mask, avoidance of overcrowded areas and good ventilation.

Lesson Learned – A major lesson learned from the pandemic in India represents the crucial importance of biomedical research and capacity building – in saving lives and economic growth.