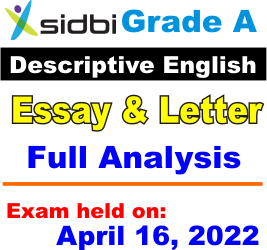 SIDBI conducted the exam for Grade A officers on April 16, 2022. The exam was objective and descriptive as well. In the descriptive paper, two essays carrying 40 marks were to be written and one Business letter carrying 10 marks was to be written. The Paper was not so hard as it was expected by many of the aspirants. The following essay topics to be written in 200 words were asked: