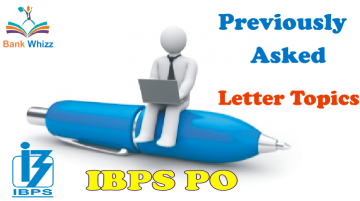 Dear Aspirant,
IBPS PO Exam is one of the most prestigious exams in India. Its preparation requires a lot of hard work, perseverance, and a keen insight into its pattern and trends over the years. You need not be an expert in writing skills to fetch better marks in the descriptive English section rather you should practice on a list of most probable topics on essay and letter on a virtual platform which should be similar to that of the actual exam under expert guidance. Also, you should go through previous year’s essays and letters asked to get familiar with the pattern which is going to be asked this year.

Please, don’t take this paper for granted. Throw yourself into preparing for this paper right from now so as to fix one seat for yourself.

Please, mark the following:
1. The Descriptive english will be of 30 minutes duration with 25 marks.
2. This Test will contain questions from Letter Writing & Essay topics.
3. Word limits for Essay writing is 250 words & for Letter Writing is 150 words.

Now, start preparing Essays & Letters with Bankwhizz. You had better prepare on a virtual platform under the guidance of some expert. Bankwhizz provides you with such a platform where you get holistic approach to its preparation.

The descriptive test carried 25 marks. Questions were asked from Letter and Essay.

This section was of 25 marks with a time limit of 30 minutes.